FORMER WWII GUNNER RETURNS FOR A FINAL B-17 FLIGHT

(February 2012) - World War II veteran, Hulan Roberts,  thought his B-17 flying days were over, after flying 32 missions in Germany.  He left the Army Air Corps in 1944 and, like many, moved forward with his life and put the war behind him.

However, Hulan, now 91-years old, relived the moments he spent aboard a B-17 as a turret gunner, while on Forever Young’s “Trip of a Lifetime” to Washington DC last year. The memories came rushing back to him after 67 years.  He never dreamed he would get to sit in the “glass bubble” where he flew so many missions ever again.

His dream became a reality when the Experimental Aircraft Association brought a B-17 to the Olive Branch Airport and selected Hulan to fly in the same position he held during WWII – nose gunner.

When the crew took Hulan up to the nose gunner position, he crawled around like he was a teenager, surprising those with him by his flexibility and eagerness to jump right in.

“He might be 91-years-old on the outside, but inside he’s 17,” said. Hulan had the privilege of sitting in the nose gunner’s position for the entire flight, including take-off and landing.  When the engines revved up, all you could see was pride, joy, and a few tears on his face.

Hulan’s sons, granddaughter, and great-grandson came along for the ride. With pleasure, he explained his duties as a B-17 gunner.

“Oh, the memories this brings back,” said Hulan. “My, my, I feel like I’ve never left.”  He spoke of the memories of war and fighting the Germans as if no time had elapsed at all, much less 67 years. Its amazing how the images of war are etched on the minds of these aging warriors.

“That was one of the greatest experiences of my life,” Hulan said, shortly after the plane landed. “It is a lot more fun when you don’t have someone shooting at you.” 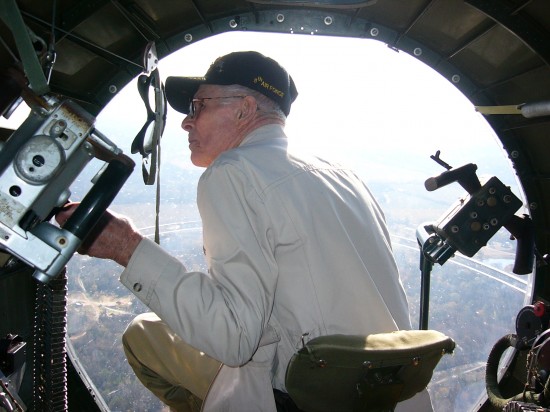